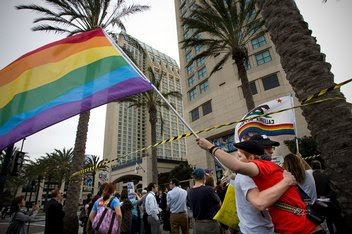 Tensions were evident between the AHA and the Committee for Lesbian, Gay, Bisexual, and Transgender History business meeting – there have been miscommunications between the two groups, and a number of members felt that the AHA had not done enough to inform its membership of alternatives to accommodations at the Manchester Grand Hyatt in San Diego which has been under boycott by the LGBT Community since it became public knowledge that the buidings owner Doug Manchester donated $125,000.00 to have gay marriage deeated in California.  About 4,000 association members — a tweedy mix of college professors, history teachers and librarians — are attending the conference that organizers decided to hold there rather than pay steep cancellation penalties that would have been incurred upon them if they cancelled.

According to one Lesbian, Gay, Bisexual, and Transgender History committee member, not enough has been done to encourage members to avoid purchasing, where possible, from stores, bars, and restaurants within the Grand Hyatt. The threaded mini-conference, however, has been the most attention the AHA has ever paid to LGBTQ history, with the seminars prominently positioned in the guidebook and drawing fairly large crowds, by AHA standards.

Meanwhile, more than 200 gay-rights activists and union members representing hotel employees rallied outside the Manchester Grand Hyatt on Saturday in the latest protest over the owner’s support for a ban on gay marriage.  The protesters banged on drums and waved rainbow flags while chanting “Boycott the Hyatt — Check! Out! Now!”

Some conference participants joined in protest on Saturday. One was Joseph Varga, an assistant professor of labor studies at Indiana University, who showed his support for the boycott by wearing a sign around his neck reading: “Angry queer historian.”  Also many members of the CLGBTH plan to demonstrate in the protest planned for 2:00 PM Sunday outside the hotel and others plan to hand out pamphlets in the Grand Hyatt  throughout the day encouraging convention-goers to avoid purchasing any items in the Grand Hyatt. The motto of the boycott is “don’t eat, meet, or greet” at the Grand Hyatt, and the CLGBTH plans to publicize ways that historians can comply with the boycott