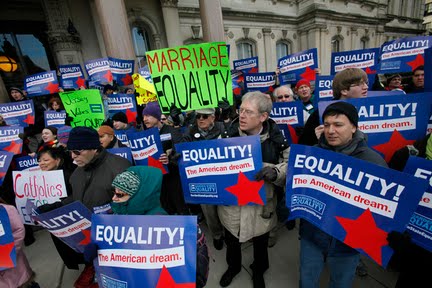 Senate President Richard Codey announced today that legislation that would legalize gay marriage in New Jersey will go up for a vote in the full N.J. Senate on Thursday.

The N.J, Assembly was expected to take up the measure before a full Senate vote, but Assembly Speaker Joseph Roberts last week said his house would not vote on it until the upper chamber approved the bill.

C’mon new Jersey! – I mean if you’ll let those MTV Jersey Shore kids marry get married and *gasp* procreat you should AT LEAST allow Gay Marriage

AFA’s Batshit Bryan Fischer: If The Confederate Flag Goes The Rainbow Flag Has To Go Too – Video