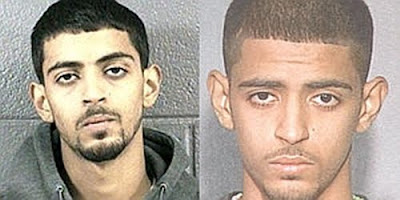 We all know that Jack Price’s attackers Daniel Aleman and Daniel Rodriguez (pictured above) have been indicted on hate crimes charges. But what many news outlets and blogs did not discuss was that the statements that Aleman and Rodriguez gave to the police that night were also released and tell a very disturbing story.

In his statements, both of which he wrote on October 10, Aleman describes first getting into a fight with a man other than Price. Aleman wrote that the man was “looking at me crazy.” When Aleman asked the man if he was “a fagot,” the two came to blows.

In the first statement, Aleman wrote that after the first fight he returned to his apartment and slept for a while.

“I came back down after 4:30 and seen somebody I recognized start to fight this guy in the store,” Aleman wrote. “So me being a stupid ass took a couple of cheap shots on the white guy also.”

In his second statement, which he wrote three hours after the first, Aleman wrote that after the first fight, he “went upstairs and changed.” Next, he wrote, he met Rodriguez, whom he did not name in either statement, but rather identified as someone he had “hung with him a couple of times prior to this date.”

The two men went to a bar, Rodriguez left, and then Aleman saw Rodriguez and “the white guy” fighting when he went to a nearby store for a cigarette. Aleman wrote that he did not know the cause of the fight.

“But it came at me and out of the door of the store,” he wrote. “I then hit the guy a few times and afterwards I left back to the bar with the other guy.”

Aleman wrote that he “felt stupid for what had happened” and “felt like total trash for that… I am not proud of any of this and hope that man is alright.”

Rodriguez told police that he knew Price, and that at the store he saw the victim “about to write graffiti on the wall, which he believes is going to be an offer for nasty sex,” according to the statement, written by a police detective who largely paraphrased the defendant. Rodriguez then insulted Price, who left the store.

“They follow him across the street and he yells at Jack, ‘You are the guy who writes that shit on the walls’ and the apprehended other punches Jack and knocking him to the ground,” according to the police write-up of Rodriguez’s statement. “He punches, kicks and slaps him and so does the apprehended other. During the attack, he calls him a faggot.”

Rodriguez told police that after the assault, he said to Aleman, “Let’s go take his shit.” They then rifled Price’s pockets. The police write-up of Rodriguez’s statement concluded saying, “He was angry because Jack is disgusting.”

I am just totally speechless.  The anger, the hate, the violence.  Not only should they be proscecuted to the fullest extent of the law.  But in my eyes but so should their families for raising such animals.

*Many thanks to Duncan O for this tip