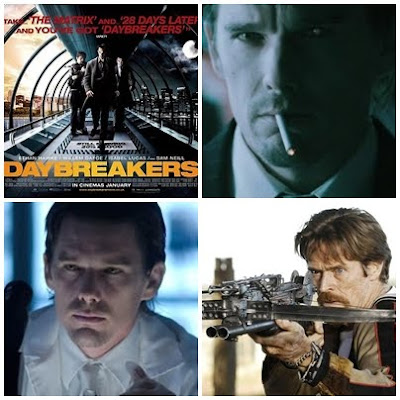 I have a secret.

Well actually two. (That I’ll admit to here.) You see I’m a Horror geek. Yes, thats right.  I am a gay man who likes horror movies. And allways have been. I LOVE Horror movies. It’s so bad I even go to Horror Conventions, have signed memorabilia, the works. My second secret is even worse. I’ve always thought Ethan Hawke was HOT. So it’s just natural that I would go see “Daybreakers” another in a long line of vampire flicks that opens today nationwide.

It’s a decade in the future and, as seems to happen regularly in the movies, a plague has swept the planet and almost everyone has been turned into some sort of living dead – in this case, into vampires.

The twist is that, even as they’ve come to dominate the planet, the vampires have maintained their human identities. Undead life has changed business hours from day to night – but otherwise, the corporate sphere still controls the world; government and commerce function as before, except with that diurnal/nocturnal flip-flop.

But a crisis looms: The highly organized vampire community has bled the world nearly dry. The supply of humans is dwindling rapidly, even at the corporation, Bromley Marks, where hematologist Edward (Ethan Hawke) works.

The effects of the blood shortage already are being felt. Vampires who don’t get enough human blood begin to devolve, turning feral and attacking other vampires – even biting themselves to drink their own blood. But that causes the vampire equivalent of mad cow disease; in this case, it’s a mania accompanied by increasing violence.

Edward is hard at work on a synthetic blood substitute, which his boss, Charles Bromley (Sam Neill), is pressuring him to perfect. So far, however, the formula causes test subjects to experience a spike in body temperature, shortly before they explode.

The surviving humans, who are hunted by the vampire military (which are outfitted with sun-proof suits so they can operate during the day), have a resistance movement all their own. Edward is himself a reluctant vampire, unwilling to drink human blood except in a pinch. When he has a run-in with the human resistance – which tells him they might have a cure for the vampire plague – he finds himself drawn into a plan that threatens the corporate hegemony of the vampire world.

The interesting thing about “Daybreakers” is that it isn’t only a vampire movie. While it has horror, great action scenes, buckets of blood, and an outstanding slow-mo scene at then, “Daybreakers” also is a business-horror story, a tale of greed and market share – even as the world collapses. You don’t have to look far to find a parallel in contemporary reality.

“Daybreakers” is a smarter-than-average vampire movie that casts a wider net than the world of the undead. (Although it would have been nice to have some gay vampires at least) And I do have to say that even at 40 years old Ethan Hawke is still easy on the eyes.

Courtney Love: “I Can Use The Word “Fag” Because I Am A Gay Icon!”