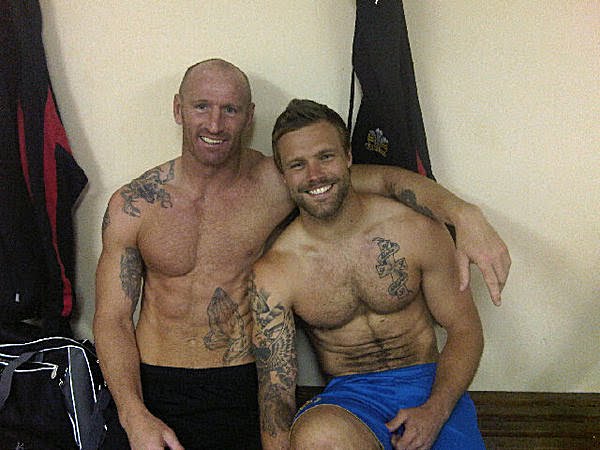 Gareth Thomas and Nick Youngquest have been sending a massive amount of flirtatious tweets to one another over the last few days. One of those messages had Thomas suggest that the they play naked Twister together and then post the photos on Twitter.

Unfortuntely the game of naked Twister didn’t take place, (DAMN IT!)  but Youngquest tweeted this photo of the two of them in the locker room instead. (Clearly Youngquest and Thomas are putting the lie to Jason Akermanis’ hysterical idea that a guy who comes out to his rugby team will create all sorts of discomfort in the locker room for the rest of the squad)

I must admit that I feel faint. Between Thomas’ amazing body and Youngquest’s cuter than cute grin, how you you choose?

The hell with it I;ll take both!

Like Loading...
EMBED-Joe Rogan Has A Creepy Locker Room Stalker – Watch more free videos
Seriously though Joe, the way you are looking lately you should be happy that anyone is checking the goods out.
Thre REAL creepy and upsetting thing about this video, besides Joe’s roid bloat is the fact that Joe uses a soundtrack of pig snorts, whips, and the phrase “Ride ’em cowboy”.  Whats up with that?