Janet Porter of the anti-gay hate group Faith 2 Action along with her close friend and fellow lunatic Peter LaBarbera of AFTAH has produced what has to be the lamest piece of anti-gay propaganda ever by releasing a video (starring the people of Walmart) of a man revealing to his family that he is an adulterer and demanding affirmation in an attempt to tie it  “coming out” as gay.

Gluttony is also a sin you fat bastards.

Ohio based hate group Faith2Action’s Janet Porter (a Linda Harvey wannabee) is out with a low budget trailer and begging for right-wing welfare (money donations) to make her new anti-gay propaganda filled  “documentary” The Criminalization of Christianity that warns America that “time and freedom are running out” in the fight to stop the gay rights movement and “If homosexual activists achieve their goal of the criminalization of Christianity.” *GASP!*

D-List hater Porter formerly known as Janet Folger, is the founder and president of Faith2Action, a site dedicated to defending “pro-family” values but mostly known for as a group opposing the Local Law Enforcement Hate Crimes Prevention Act of 2007.

Porter has compared  homosexuality to “alcoholism” and “kleptomania” and firmly (and delusionally) believes that “Christians” are being victimized by the media and popular culture and that gay rights groups have persuaded Americans that Christians who condemn homosexuality are intolerant, while actually it is gay people and their supporters who are intolerant of Christians.

In her disgusting trailer below, Porter claims that gay rights advocates are “threatening marriage,” “threatening our children” and “threatening freedom” and makes references to the Jerry Sandusky being gay and his  abuse case (Sandusky was married and not gay), Chick-fil-A,  and a Michael Swift article from 1987 which Religious Right lunatics still over 25 years later apparently don’t realize was satire along with scary ominous music and a link on their website to “DONATE”

What is it about the midwest and its high rate of producing serial killers and anti-gay “christian” lunatics?

Faith2Action’s batshit crazy Christomaniac loon Janet Porter had scheduled a fetus to “testify” on behalf of her anti-abortion “Heartbeat Bill” in Ohio.

A fetus has been scheduled as a legislative witness in Ohio on a unique bill that proposes outlawing abortions after the first heartbeat can be medically detected.

Faith2Action, the anti-abortion group that has targeted Ohio to pilot the measure, called the in-utero witness the youngest to ever come before the House Health Committee at 9 weeks old.

Faith2Action president Janet Folger Porter said the intent is to show lawmakers who will be affected by the bill, which abortion rights groups oppose. Ohio Right to Life has not endorsed the measure.

An aide to committee Chairman Lynn Wachtmann said a pregnant woman will be brought before the committee and an ultrasound image of her uterus will be projected onto a screen. The heartbeat of the fetus will be visible in color.

Porter served as the co-chair of Mike Huckabee’s Faith and Family Values Coalition when he ran for president.

With  any luck the fetus will turn out to be a gay athiest.
Tweet

Yesterday Theresa Cao was arrested in the gallery of the U.S. House for screaming, “Except for Obama! Except for Obama! Help us Jesus!” during the GOP political stunt of reading the (partial) U.S. Constitution when it got to the point about a United States President being a natural born citizen.

Now less than 24 hours later  Alvin McEwen of Holy Bullies and Headless Monsters has found a video taken of Cao at a Faith2Action May Day event in DC, which called upon God to strike down Obama and as Pam Spauding at Pam’s House Blend points out:

“Our favorite homophobe Peter LaBarbera was there to deliver an anti-gay prayer and as the video shows, Cao was there delivering her best “black woman catching the Holy Ghost” dance behind some of the speakers. Then she decides to take the microphone and do what can only be termed as a bad imitation of Joan Jett. And then things get very interesting with her passing out from a “trance dance:”

What exactly is it that makes this country produce so many whackadoodles? Besides just evangelical Christianity, that is? 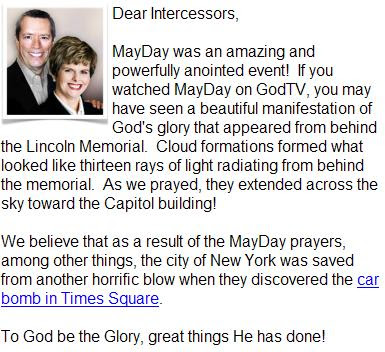