Michele Bachmann appeared on Glenn Beck’s radio show today where they talked about hor Bachmann is being attacked by the evil shameful gays ares stooping so low as to use children like 8 year old Elijah against her.

I suppose theres nothing evil putting tape over the mouths of toddlers and forcing them to stand on the steps of the Capitol holding pictures of mutilated babies, as per the pro-life fanatics.

Glenn Beck is OVER.

Beck who once enthralled tens of thousands of teatards couldn;t even half fill the room for his speech at HATERPOLOOZA 2012 aka. The Values Voter Summit.

To a nearly empty room Beck claimed that the “the violent left is coming to our streets” to “smash, to tear down, to kill, to bankrupt, to destroy.”  and that its growth” will become a worldwide phenomena and that he doesn’t care how much his prophesy is “mocked and ridiculed.”

Sounds like someone a bit grumpy that he’s sliding into obscurity where he belongs.

Like Loading...
I seriously laughed out loud at the hypocrisy when he said “They’re trying to sell you﻿ propoganda!” considering that’s all Beck has been doing for the last few years
Next up on Glen Beck: How the show “I﻿ Dream Of Jeannie” promotes Sharia Law.

Well Glenn if it is the “end times” there is only one thing to do.

Someone please send me the dagger Gregory Peck had in the Omen.

An estimated crowd of between 200,000 – 250,000  Americans attended Jon Stewart’s and Stephen Colbert’s “Rally to Restore Sanity and/or Fear yesterday in Washington, DC.

According to CBS News, 215,000 people showed up for the rally on Saturday. By comparison, CBS estimated that 87,000 — just 40% of the Sanity Rally estimation — attended Glenn Beck’s “Restoring Honor” rally in August

Canada’s CTV, meanwhile, wrote that 250,000 people were estimated to have partaken in the Rally to Restore Sanity.and earlier on Saturday, Brian Stelter tweeted that the Parks Service approximated that “well over 200,000” attended Saturday’s rally.

Listen below to the Anttichrist himself, Glenn Beck as he warns his minions that “Violence is part of the plan” and that ” Violence is coming, and violence will come from the feft”

Don;t be surprised if soon Beck will be telling them is to launch a preemptive strike against the left, and it’s okay because it’s self-defense.  This is just in order to validate a “shoot first” policy, nothing more, nothing less. 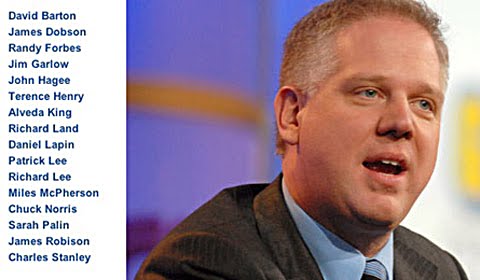