It seems that talented, tall dark and handsome Cheyenne Jackson (Well before he divorced his hubby, grew a stash and covered himself in prison tats) has made a jackoff video with his iphone to send to his new boytoy in WeHo, or has he

While some are calling it a look-a-like, Bradford Matthews over at Fleshbot Gay goes all Sherlock BONES and lays out some pretty convincing evidence that it is indeed Cheyenne in the 52-second video reaching a very happy ending and then turning the camera on (half) of his face to say “Clearly, I need my boyfriend here.”

So is it Cheyenne?  Isn’t it?  Well that is for you to decide.

You can watch the VERY NWSF video below and chime in using the comments section.

Last June it was announced that Director Rob Marshall had made Stephen Sondheim’s INTO THE WOODS a musical which  intertwines the plots of several Brothers Grimm fairy tales and follows them to explore the consequences of the characters’ wishes and quests as his next project at Warner Bros/Disney.

Well on Monday a cast reading of the screenplay reading which included in alphabetical order): Nina Arianda as The Baker’s Wife; Christine Baranski as the Stepmother; Tammy Blanchard as Florinda; Victoria Clark as Cinderella’s Mother/Giant; James Corden as the Baker; David Garrison as the Narrator; Ivan Hernandez as the Wolf; Megan Hilty as Lucinda; Cheyenne Jackson as Rapunzel’s Prince; Allison Janney as Jack’s Mother; Anna Kendrick as Cinderella; Michael McGrath as the Steward/Baker’s Father; Donna Murphy as the Witch; Laura Osnes as Rapunzel; Taylor Trensch as Jack; Casey Whyland as Little Red Riding Hood; and Patrick Wilson as Cinderella’s Prince.

Now while those at the reading ARE NOT officially cast in the movie version as of yet there is a good chance that more than a few will be in the movie (Good Luck Cheyenne!) But the real news is that the website BroadwayWorld.com has  learned that  screen legend Meryl Streep is in talks to join the film as the Witch, but was unable to make the reading. (We like Mertyl but …. WE WANT BERNADETTE PETERS!)

James Lapine, wrote the original book for INTO THE WOODS, is reworking the script for the screenplay which won several Tony Awards, including Best Score, Best Book, and Best Actress in a Musical (Joanna Gleason), in a year dominated by The Phantom of the Opera.

Stephen  Sondheim is expected to contribute some new songs.

INTO THE WOODS which won won several Tony Awards, including Best Score, Best Book, and Best Actress in a Musical (Joanna Gleason), in a year dominated by The Phantom of the Opera.

Press photo for The Performers

PLEASE feel free to leave your reponses in the comments section.

“I am disgusted and appalled by Tracy Morgan’s homophobic rant. The devastating repercussions of hate-filled language manifest in very real ways for today’s LGBTQ youth. I’ve known Tracy for two years, spent many long hours with him on set, and I want to believe that this behavior is not at the core of who he is. I’m incredibly disappointed by his actions, and hope that his apology is sincere.”

Meanwhile Wanda Sykes not only took took Morgan also fellow African-​American comedian Chris Rock and also Roland Martin, a CNN journalist, both of whom came out in strong support of what they see as Morgan’s right to say what he wants, without criticism.

Sykes said, “I do believe in free speech, but for a youth in TN or any other numerous place, Tracy just yelled, ‘Fire,’ in a crowded theater,” adding, ”Morgan “is just a dumb comic,” but also  she didn’t “believe Tracy would be so ignorant in LA, because we have a mayor, a city council,and police chief who believes we are all equal.”

When done with Morgan then set her sights on fellow comedian Chris Rock, who had said, also via Twitter, “I dont know about you, but I dont want to live in world where Tracy Morgan cant say foul inappropriate shit.”To which Sykes responded again via Twitter: Ok, piss’d reading, “I don’t want 2 live n a world where Tracy can’t say…” I Do! U Keep the world, just break me off an evolved country,”

But Wanda, God bless her soul wasn’t done yet.  CNN reporter Roland Martin, who spent a good part of the day on Twitter and Facebook vigorously debating his followers over Tracy Morgan’s comments, and ultimately wrote a column of his own in support of Tracy Morgan, titled, “WTF? Comic Tracy Morgan Has Offensive Material? To which Wanda shot back: Ro, I love and respect you, so I feel that I can tell you that your column is some bullshit. We can do better.” and “Tracy has the right to say whatever he wants to say, just like we have the right to say, not acceptable. We used to picnic to watch public hangings, but WE figured out, that was some sick shit.”

** NOTE:  PLEASE use the Google +1 Button on the right hand side of this post and publicly
give Back2Stonewall.com your stamp of approval. Your +1’s can help others on the web find Back2Stonewall.com  when they search and help give the LGBT Community an alternate voice.

Written and directed by Steven Williford and produced by Molly Pearson and Paul Marcarelli “The Green” described as “a tense, intimate drama about a gay teacher (Harner) at an elite private school accused of misconduct with a male student,” the cast features Jackson as Harner’s lover with Illeana Douglas as their best friend, Julia Ormond as the lawyer who defends Harner and newcomer Chris Bert as the student.

* Congressman Barney Frank who is roughly worth about $1 Million dollar, scaused a HUGE scene when he was denied a $1 senior citizen discount on his ferry fare to Fire Island.  Hey Barney! Maybe if you caused that much of a scene in The Senate we might get Equal Rights sometime soon!

*  Only 20 Gay and Lesbian Couples have married in Portugal since the country has leagalized same sex marriage.

*  Alexander Skarsgard is the new face of Hickey Freeman. Hopefully his body will be also.

*  Quers4Gears reports that The Phoenix International Raceway will be reaching out to gay NASCAR fans.  HOT DAMN!

*  Only about 10% of the Pentagon’s ‘DADT’ Surveys Have Been Returned.  Maybe , just maybe soldiers have better things to do like, um, maybe fight a war? (Let me add a senseless war.)

*  Cheyenne Jackson (pictured at left) is going to bring both BUTCH and BITCH to “GLEE” next season as he becomes the new vocal coach of  the GLEEK’s rivals Vocal Adrenaline.  Bend over and take it like a man Mr. Schuester!

*The Real World: New Orleans Ryan Leslie has issued an apology via Twitter and to GLAAD for his anti-gay and violent tweet last week. Who cares man you are still a douche. 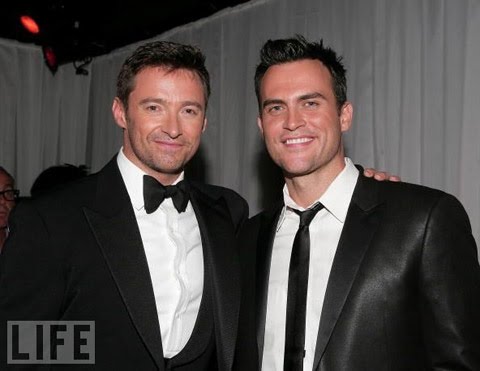