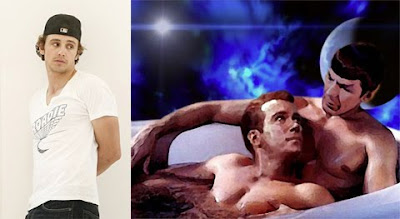 Last week Newsweek published truly offenive article by Ramin Setoodah titled “Straight Jacket“, in which he claims that gay actors cannot convincingly play straight roles. (Which is laughable considering how man closeted gay men in Hollywood actually do.)  Setoodah who uses barely veiled homopobia when writings on gay topics. (Either because of an internalized problem that he has or for sensationalism reasons had even gone so far in the past to suggust that Lawrence King (who I believe was 15) “had it coming” because his experimenting with his gender identity “made others uncomfortable”.

Kristin who  is currently starring in Broadway’s Promises, Promises opposite Sean Hayes, whom Setoodah describes as “the pink elephant in the room.” wrote a letter to Newsweek blasting its irresponsibility for publishing such an article and condemning Setoodah for writing such irresponsible homophobic garbage.

“As someone who’s been proudly advocating for equal rights and supporting GLBT causes for as long as I can remember, I know how much it means to young people struggling with their sexuality to see out & proud actors like Sean Hayes, Jonathan Groff, Neil Patrick Harris and Cynthia Nixon succeeding in their work without having to keep their sexuality a secret.

No one needs to see a bigoted, factually inaccurate article that tells people who deviate from heterosexual norms that they can’t be open about who they are and still achieve their dreams. I am told on good authority that Mr. Setoodeh is a gay man himself and I would hope, as the author of this article, he would at least understand that. I encourage Newsweek to embrace stories which promote acceptance, love, unity and singing and dancing for all!” – Kristin Chenoweth