In the  pre-internet days of the 1970’s long before SCRUFF and GRINDR the only options for a gay man to hook-up other than driving to a major city to go to a bar or going to the local parks men’s restroom was through personal ads in  a now forgotten magazine called Club Goldenrod: The Magazine for Male Swingers.

Some of the ads with photos shows some hot guys with big cocks, and it’s doubtful they were doctored, as this magazine was published before Photoshop!

What’s all interesting is the variety of guys: there’s not attempt to conform to a beefed up gym bunny look with a hint of scruff and tattoos, or even closer to the time period of the magazine, a gay macho look.

There are also some transvestite ads (that have to be seen to be believed).

The way the magazine worked was that ads were broken up by State.  Those who were brave enough to write an a paid ad was charged by the word and was assigned a CG mailbox number.  Some would send pics but never with a face.  If you saw an ad that you liked you’d write a letter to the man advertising, place your letter in an envelope and write the guys ad number on the front and then place the envelope into another envelope and Club Goldenrod would forward your letter to the ad number owner. The whole process took about 2 weeks. (Talk about blueballs!) If the guy was interested he’d write back.

So when you argue about how hard it is today to meet a guy.  Remember Club Goldenrod and maybe you’ll learn the meaning of the word patience. 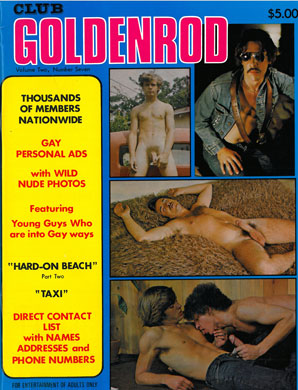 Sen. Jeff Merkley To Introduce Sweeping Federal LGBT Rights Bill That Has No Chance In Hell of Passing

University of Kentucky Asks LGB Students “If it were possible, would you choose to be straight?”

2 thoughts on “Gay History 101: Decades Before GRINDR and SCRUFF There Was “Club Goldenrod: For Male Swingers!””