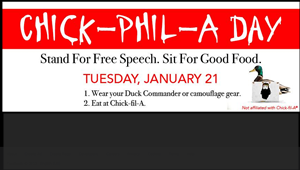 And here we go!

In response to A&E’s recent suspension of Duck Dynasty’s patriarch Phil Robertson over his racial and anti-gay remarks, groups around the country are beginning to promote Jan. 21 as National Chick-Phil-A Day. Those that support Robertson are encouraged to wear camo and/or Duck Commander gear and eat at a Chick-Fil-A restaurant on that day.

The movement (?) has more than 25,000 sign ups for their event, and wants all freedom of speech and God loving Americans to support the restaurant chain and the show.

“Join a national movement in supporting two of the biggest brands to have, in recent history, come under fire for sharing an opinion on personal faith-based beliefs,” the group’s Facebook page said. “Join us on January 21st as we make a loud and undeniable statement… we will no longer be silent.”

Chick-fil-A who knows a little something about anti-lgbt controversies, has issued a statement that the restaurant chain “is in no way affiliated with or sponsoring the Chick-Phil-A Day events” 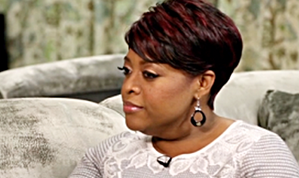 The View’s Sherri Shepherd: I’m Not A Judgmental Bigot Because I Believe Gays Are Going To Hell 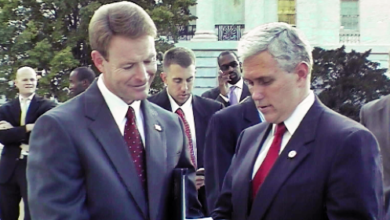 Video – Bristol Palin Throws Down At The Sisters: “You’re A Homosexual…. I Can Tell”