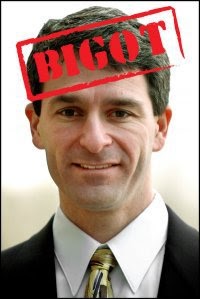 GOP Virginia Attorney General Ken Cuccinelli know how to sieze an oppurtunity to play to his extreme right wing anti-gay base by announcing that Virginia has dropped the King & Spaulding law firm over the fact that they dropped the House of Representatives as a client over the Defense of Marriage.

Calling King & Spalding’s DOMA decision an “obsequious act of weakness,” Virginia AG Ken Cuccinelli wrote a letter to the firm informing them of the firing: “King & Spalding’s willingness to drop a client, the U.S. House of Representatives, in connection with the lawsuit challenging the Defense of Marriage Act was such an obsequious act of weakness that I feel compelled to end your legal association with Virginia so that there is no chance that one of my legal clients will be put in the embarrassing and difficult situation like the client you walked away from, the House of Representatives.

Virginia had retained K&S in 2009 the law firm itself has done very little work for the state.  Also Cuccinelli’s childish rant makes Virginia look bad. To imply that King And Spalding “abandonned” the defense is ridiculous: no civil proceedings have even begun..

To Cuccinelli pandering to homophobes like himself  is always in style in the Old Dominion.