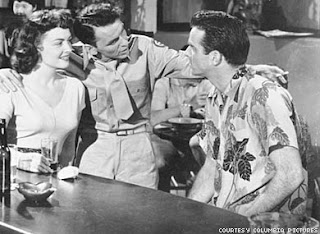 It’s taken 60 years but the James Jones classic novel From Here To Eternity will be reissued digitally, with previously censored references to homosexuality restored via the ebook firm Open Road.

The heirs of author James Jones struck a deal with ebook firm Open Road to to put out a new edition that includes two scenes which includes Private Angelo Maggio –  played by singer Frank Sinatra in the 1950 film – reveals he is paid to have oral sex with another man for money and  a scene referring to a military investigation into possible homosexual relationship will also be present.

The new version will also include profanity that was considered too extreme for Eternity’s original publisher Scribner. “It’s been on my mind for quite a few years, and the right moment just hadn’t come up yet. My father fought bitterly to hold on to every four-letter word in the manuscript,” his daughter Kaylie told the New York Times. “The publisher was concerned about getting through the censors.”

On a personal note I’d like to say Thank you to the Jones heirs and to Open Road publishing for returning the original content to the book.  We have been around since the beginning of time and by replacing us back into your fathers original vision of From Here To Eternity helps us regain our place in what was an often too scrubbed, repressed era in America Literature.
via BBC News