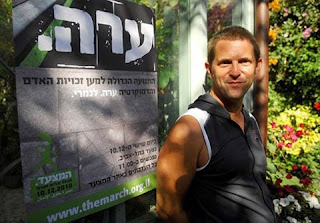 Gay activists and academics praised Spivak’s nomination, describing it as “a ray of sunshine, especially at a dark time like today where human rights organizations are under attack.”

Mr Spivak, a Harvard graduate who lectures at Tel Aviv University’s law department, has been involved in several high profile gay rights cases, including the Supreme Court’s landmark 1997 decision forcing a state channel to broadcast a programme about gay teenagers.

A lawyer for the ACRI, Dan Yakir, told Israeli newspaper Ynet that the appointment would “contribute to developing human rights”.

How do you say “Nice guns, Your Honor” in Hebrew?