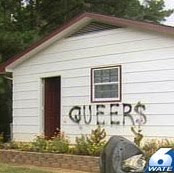 Carol Ann Stutte and her partner, Laura Stutte of Vonore, TN are afraid to return to whats left of their home after being victims of an arson and having the word “queers” spray painted on their garage.  The couple, who have been together for more than 16 years, were in Nashville celebrating the five-year anniversary of moving into their Vonore home, the night it was burned to the ground.

Carol Stutte said she and Laura have been being harassed and threatened, specifically by one neighbor, on and off for about five years.“The last in-depth threats were several weeks ago,” The couple tried to ignore the threats, but eventually decided to file a report with the Sheriff’s Office.

“It is an arson and we are continuing the investigation  said Detective Travis Jones, with the Monroe County Sheriff’s Department

Becky Lucas, president of Parents, Families and Friends of Lesbians and Gays Maryville, said she is outraged by the Vonore arson. “We are hopeful that the authorities will investigate it fully and that this couple will get justice.  I think this happens every day to people in this community and many times they don’t speak up because they are afraid. Everybody deserves basic human rights.”