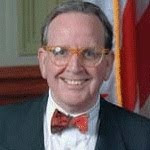 Openly gay, DC Councilman Jim Graham has been attacked and his constituents harassed by two different right wing extremist robocalls claiming such lies as that Graham “paid for an abortion” of open of his staffers, has a lover on the city payroll, and is implicated in D.C.’s taxicab bribery scandal..  The calls are anonymous, with no message indicating who was behind it or who financed it.

Three guesses?  NOM, Biushop Harry Jacskon, or ________?.  My personal money is on The National Organization For Marriage who wants the D.C. City Council GONE because it  voted to recognize recognizing same-sex marriages and is publicly funding right wing extremist candidates/

“Jim Graham paid for an abortion for his male companion’s chief of staff’s girlfriend. It’s no secret, as reported by a local newspaper. Paying to take the life is evil, especially when you weren’t even the parent. Jim Graham is wretched, immoral and doesn’t deserve to represent us. Let’s get a decent human being to fight for our children, not kill them. Graham is sick and we can do better. Do not vote for Jim Graham.”
Read more after the jump…..

The Graham campaign has contacted the Metropolitan Police Department, the Federal Communications Commission and the Federal Bureau of Investigation.  because the calls have violated federal law which requires automated calls to identify their source and purpose.

“This is the lowest form of a robocall that I’ve ever heard,” Graham campaign spokesperson Chuck Thies said. “Ever.”

Thies believes that authorities will quickly discover who was behind the call. In the meantime, the political fallout will likely be minimal. This robocall is toxic, and it would only harm an opponent to draw attention to

You can listen to the Robo Call here via TBD.com