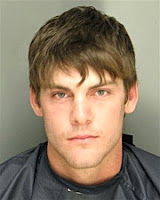 Witnesses and the victim told police Stevens yelled derogatory terms about his sexual orientation before he hitting him, Stevens had been in the gay bar with a friend Thursday night and police believe he got upset after a woman turned him down.

Police officer chased Stevens briefly after witnessing the punch, took him to the ground and handcuffed him. He was arrested on suspicion of third-degree assault, resisting arrest and failure to comply.  Under Nebraska law, penalties can be enhanced if a person is convicted of committing certain offenses because of the victim’s “race, color, religion, ancestry, national origin, gender, sexual orientation, age, or disability