David Yost, who played the Mighty Morphin’ Power Rangers’ Billy Cranston (Blue Ranger), has come out of the closet after a long and rocky road.

David says he quit the show over constantly being harassed over his sexuality. “Creators, producers, writers, directors” all threw the Faggot word around at him. Yost, “walked off set one day in the middle of lunch,” a move he had been thinking about for about a week. “Continuing to work in an environment like that is really difficult. I myself was struggling with who I was, or what I was, and to be made fun of on some level, or to be stereotyped, or put into a category … I was continually being told I’m not worthy of where I am because I’m quote-unquote a gay person and I’m not supposed to be an actor and can’t be a superhero.”

David then spent two years trying to “pray the gay away,” had a nervous break down, checked himself into a mental hospital for five weeks, and then moved to Mexico for a year. “It frustrated me that I hated myself on such a level that I couldn’t accept myself.”

I’m glad to see that David is happy and comfortable with himself now.  Welcome brother.

You just can’t even compare the coming out process of what David went through to accept his sexuality and deal with the homophobia with Ken Mehlman, who is living in luxury based in part of the homophobic environment that he helped foster that made life so hard for David.

You know where my sympathies lie, and it’s certainly not with Mehlman.

It’s Official! 90201’s Teddy Montgomery Crossed Over To The Gay Side Last Night In The Cliche Way Most "STR8" Men Do. He Got Drunk! – (Video) 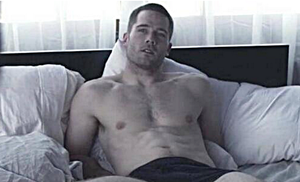