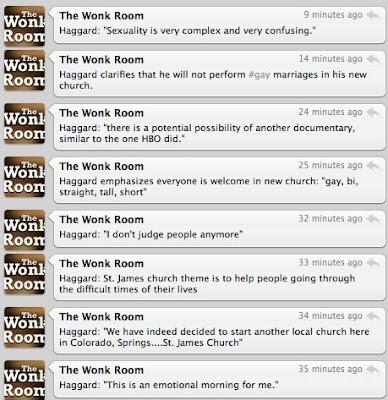 So today Ted Haggard called a major press conference to announce his groundbreaking news that Ted is starting a new church called St. James Church. But we already knew this.  Last month.

“…the Haggards are starting a new ministry, called St. James Church. During his press conference at his Colorado Springs home, surrounded by his family, Haggard said his new church’s theme would be to ‘help other people go through the difficult times in their lives.’ Everyone will be welcome: Democrat, Republican, gay, straight, addicts, tall, short, etc…Haggard said that he doesn’t expect St. James to become another megachurch, but ‘helping one is better than helping none.’ The church’s name comes from the Bible’s book of James, which emphasizes good works along with faith; Haggard said it stems from the ‘tangible form’ of love and help that his family received after his fall from grace.”

Well unless the free coffee served in his basement will be next to a glass bowl of crystal, we’re going to stop listening to Ted’s “big announcements”