*  Ellen Page Is a Lesbian……In a movie! Ha ha, did you think I’d OUT someone in THIS section?  Seriously though, Ellen Page has signed on to star in Freeheld, a movie based on a documentary about a lesbian couple fighting for pension benefits when one of them gets sick. Page will play the non-ailing party. The guy who wrote the very-similar Philadelphia is on hand to write, so sounds like everything is aligning pretty nicely. Yay Ellen!

*  Hot and studly (And my dream boyfriend) James Franco grabbed a microphone the other night and performed with artist Kalup Linzy on Sunday night at an event celebrating the 150th anniversary of Campari.  Franco got up in a tuxedo, his hair slicked back, looking a little like Christian Bale in American Psycho: assessing, aloof, addled. Plopped onto a red velour wing chair in the middle of the small stage, clutching a microphone, his role in the performance was to stare with arrogant fascination at Linzy’s ample ass, as the singer performed torch songs about bad men. Franco looked sleek, game, and sincerely confused, and sang badly on their duet, which was Nicolette Larson’s ‘Lotta Love.  VIDEO PLEASE!

*  Metro UK asks Chace Crawford how he responds to rumors he’s having a secret gay romance with co-star Ed Westwick: “I just throw my head back and laugh. It’s not hard to deal with when there’s no truth to it. Just ignore it and it’ll go away.”  True, after all the guy Crawford’s “dating” IS NOT Ed Westwick,  Just ask anyone at Marie’s Crisis in NYC.  (ALLEGEDLY)

*  Somebody is trying to tie Lindsay Lohan into another lesbian affair. The flailing “actress” latest supposed love? Indrani, the photographer who just so happens to have a new Bravo television show to promote.
Double Exposure, which premieres June 15, stars Markus Klinko and Indrani (former lovers!) as they, uh, shoot fashion spreads and other nonsense that now counts as programming.  Cue Indrani’s defense of Lohan: “We have been spending a lot of time together. I have never had a relationship with a woman before, but Lindsay is just somebody who I find fascinating, gorgeous and extremely smart, as well as super-hot. Lindsay gets a lot of bad press, but she’s a really strong, creative woman and is trying really hard to get her life in a good, positive place.”

And of course there’s co-star Klinko to lay it on heavy: “Lindsay and Indrani have been seeing each other since we shot her last fall. I’ve seen them on dates, I have seen them making out . . . Indrani is a good influence on Lindsay.  —–  UGH!

*  The first shots from Tarsem Singh’s “war of the gods” film Immortals have sprung on to the web. So far, none of Kellan Lutz as Poseidon, but here’s Henry Cavill as Theseus to whet your appetite. 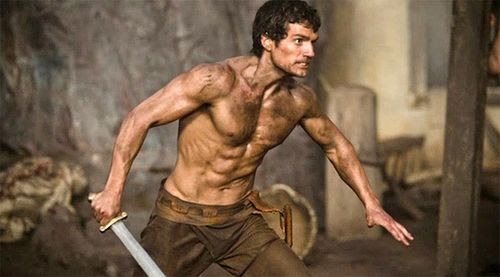