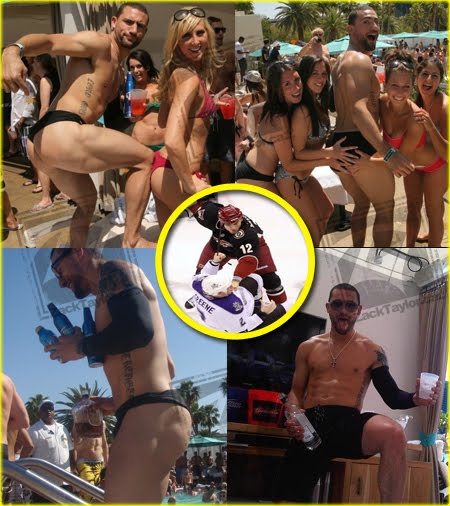 So says a source from  ZackTaylor.ca (.ca!) who saw Paul Bissonnette, the 25-year-old NHL player with the Phoenix Coyotes at the Wet Republic pool spot in Vegas.

“Paul is such a great guy. He was all over my friends and I, but kept telling us he’s gay and not to worry… He was a drunk mess!”

Just the booze talking?! Telling girls that you’re gay so they let you grope ’em?! Or could Paul officially be the first “openly active gay” NHL hockey player?!

Zack Taylor.ca then recieved this message from Paul:

“I am 100 percent straight. I don’t know what girls told you that. They are just trying to start a story because they are probably bitter over us kicking them out of our booth at XS Nightclub. As for the photo with that guy back in 2007 – He’s the ex-boyfriend of a girl I dated from Vancouver. We thought it would be funny to take a photo together. I’m not an insecure guy. I’m 100 percent straight… I enjoy banging broads haha!”

Well  no great loss.  He’s got a great ass and legs but that face is why they make leather masks with zippers.