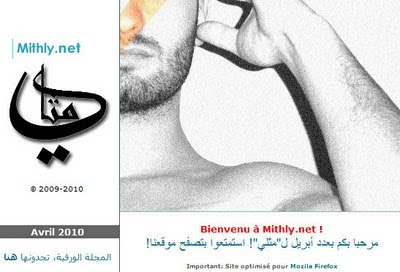 Mithly means “the same as me” in Arabic; it is also a respectful way to refer to homosexuals. It is a word that the people behind Mithly magazine would like to see replace the more common “shazz,” meaning pervert or deviant in Arabic, or “zemel,” an expletive to describe gays in the Moroccan Berber dialect. Mithly was launched in the Moroccan capital Rabat earlier this month. Even though the magazine has received partial funding from the European Union, it was printed clandestinely and its first 200 issues were distributed under the counter. In Morocco, as in the rest of the Arab world, homosexuality is a criminal offense, punishable with six months to three years in jail. “So far the reporting about homosexuals in Morocco has been the monopoly of the mainstream media, most of which describe us as perverts and a menace to society,” said a journalist for Mithly who identified himself only as Mourad. “Mithly is a chance for homosexuals to give their side of the story. We wanted to give homosexuals in the Arab world a voice.”

You can read Mithly online HERE